21st Century Logistic | Trust in us to deliver quality 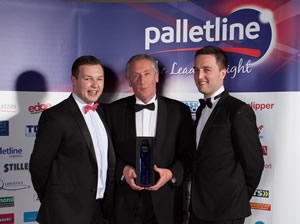 Stephen Sanderson Transport has won two of the most prestigious awards at this year’s Palletline Annual Awards held in Birmingham.

For the fourth year in a row, Sandersons won Medium Delivery Depot of the Year 2012, an award based on Palletline’s statistics, and this year also scooped the main award, Depot of the Year, voted for by fellow members of the Palletline network. This is the award that is always hotly contested and highly coveted by the winner!

“We believe these awards not only demonstrate the value that our customers place on our unrivalled service but clearly show that as a business we manage ourselves well. Commitment to service will always remain above everything else in the way we conduct ourselves and I would like to congratulate our whole team, who have all contributed in their own way to our success”.